The city of Bellevue has approved the Master Development Plan for the Bellevue 600 project located along NE 6th Street, between 110th Avenue NE and 108th Avenue NE. Full build-out of the proposed Bellevue 600 will include a 40-foot tall podium structure with two new high-rise towers in the eastern half of the proposal site and the existing Bellevue Corporate Plaza (BCP) office building in the western half of the site. The site itself is approximately 3.65 acres. 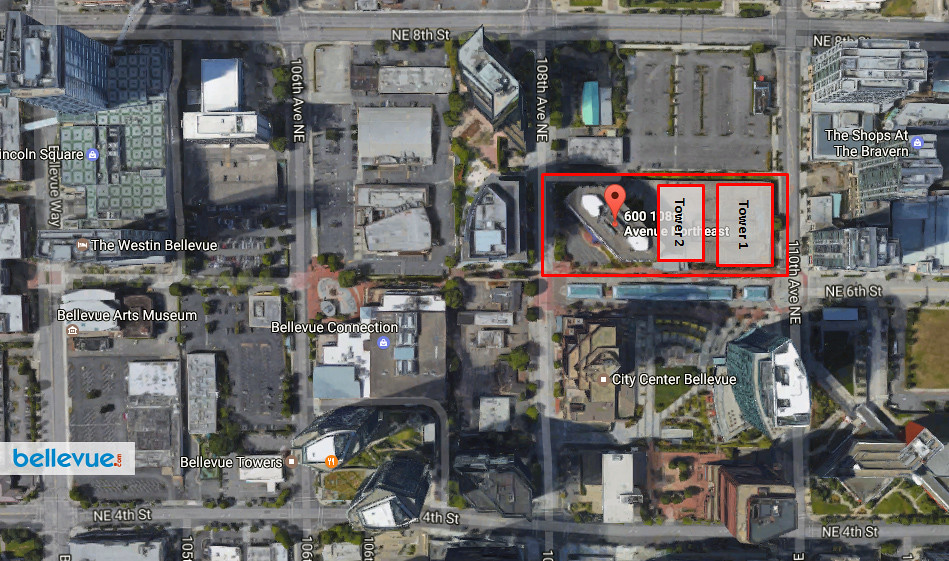 Bellevue 600 will be comprised of two towers over a retail podium, including an approximately 794,000 gross square feet, 450 foot tall commercial office building (Tower 1) and an approximately 491,000 gsf, 435 foot tall business hotel (Tower 2). Both towers will rest on a 40-foot tall podium that will include an above ground parking garage, retail uses, and building lobbies along the street frontages facing 110th Avenue NE and NE 6th Street/Transit Center. There will be approximately 370 parking spaces above ground and an additional 1,590 parking spaces will be placed underground under the podium. This parking will serve not only the new development but also the existing BCP office building.

The two new Bellevue towers are envisioned as narrow, modern, urban residential and office structures that reflect the scale, materials and character of downtown Bellevue. The upper levels of the tower most likely will be composed of full-height glass curtain walls and metal panels.

Other prominent building developments within a two block radius of the proposal site include Bellevue International Plaza adjacent to the north, the Symetra Building on 108th Avenue NE to the west, The Bravern and Meydenbauer Center to the east, and City Center I, City Center II, and Bellevue City Hall to the south. In the near future, the new light rail station will be built in front of City Hall, directly diagonal to this site on the southeast corner of the NE 6th Street and 110th Avenue NE intersection.

Bellevue 600 is being developed by Touchstone on behalf of owner Equity Commonwealth. The project is next headed to design review.