Welcome to Buildvue. You're welcome to build more and up!

Thought we have seen it all with the recent construction design proposals in Bellevue. From Lincoln Square Expansion to the Mirador, angled and protruding multi-storied bays tower to rooftop conference center, Kimpton Hotel to Evergreen Plaza's "butterfly" roof and the multi-phase, mixed-use, multi-everything Spring District.

PSBJ reported that Plus Investment USA has submitted designs to Bellevue to build a massive five-tower project called Bellevue International Plaza in downtown. The project is located on the south side of NE 8th Street between the Bravern to the east at 110th Ave NE and Symetra to the west at 108th Ave NE. 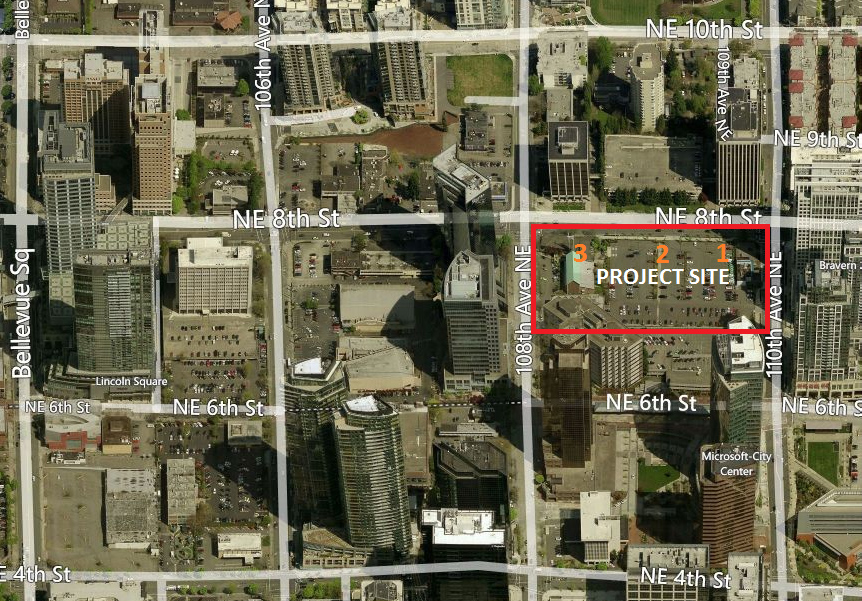 Bellevue International Plaza will be a multi-phase project and the developer hopes to break ground this fall. The original proposed designs called for five towers in all--four residential high-rises and one mixed-use office/hotel tower.

The most recent proposed designs submitted to the city this week showed that the project has scaled back to a total of four towers with phase two of the multi-tower project consisting of an office tower and a 4-star hotel. Bellevue International Plaza will include open space and pedestrian paths that connect the site with downtown.

Plus Investment USA is the local real estate arm of Hong Kong-based Plus Investment. The company paid $30 million for the First Congregational Church property and followed that with the $45.9 million acquisition of the land on the east end of the block. Bellevue-based MZA Architects is designing Bellevue International Plaza.